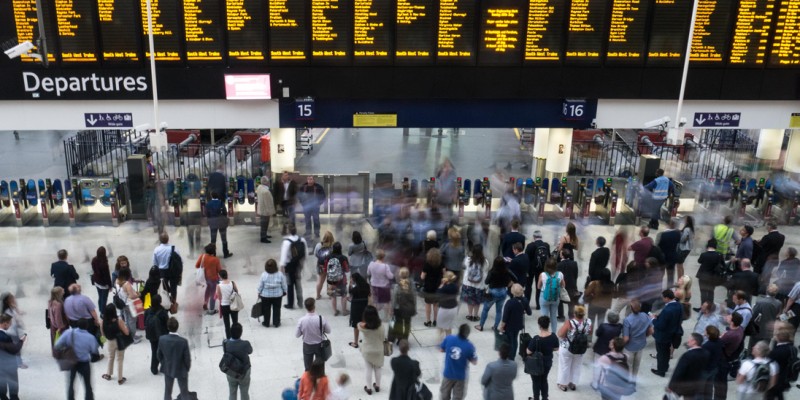 It was the hottest day of the year and I had, unwisely it turns out, elected to let ‘the train take the strain’ – or not as the case may be.

Of course, I didn’t know it was going to be the hottest day of the year when I booked my ticket to Manchester. My partner joked that there were bound to be delays because the heat was causing trouble on the tracks. “I’ll be late home then,” I replied. In the end, it wasn’t the heat (not directly anyway) that caused the problems in Manchester that day. It was a broken down train that had had some kind of electrical problem and had brought down some of the network’s power cables – or at least that’s what the platform announcement said, although later on other people had heard all sorts of other stories.

So, at just after 3pm all train services into and out of Manchester were suspended whilst the problem was sorted out. Two hours later there were still no trains moving and Manchester Piccadilly was beginning to feel like a disaster zone. The station was packed, British Rail staff carrying boxes of water bottles were circulating handing them out free to passengers who were suffering in the heat. There were queues everywhere: people trying to get information from staff that didn’t have the answers they were seeking, or flocking to a platform as a rumour started that a train was about to leave – not true of course.

The train I was booked on, with a reserved table seat so I could work in comfort, was confirmed as cancelled and I was advised that the first train likely to leave would be the 5.05 going who knows where, but definitely via Birmingham New Street where I could change. Because of the problems all ticket restrictions had been lifted. ‘I’ll be on that train,’ I promised myself, as did probably every passenger at the station hoping to head south.

By now the station was getting even fuller as passengers doing a daily commute from Wilmslow, Stockport and other local towns had finished their working day and were hoping to catch a train home.

I boarded what promised to be the 5.05 at about 4.50. The carriages were already packed so it was standing space only in the outer corridors. For the next 10 minutes people carried on squeezing onto what was already a very full train. There were people everywhere – even in the part of the train where two carriages join. A heavily pregnant lady had to sit on the toilet as there was nowhere else for her to go.

At last, the doors closed and we all breathed a sigh of relief at the thought we would soon be departing and no-one else could get on. That proved to be a little optimistic as 10 minutes later we were still stationary, on the platform, but now, with all the doors closed, no windows that would open and no air conditioning in the outer corridors, it was proving to be not just uncomfortable but health-threatening. We weren’t just sardines packed into the proverbial can, we were sardines cooking in a tin can. The temperature outside had hit 36 centigrade so heaven knows what it was inside this dangerously overcrowded train. One lady was close to a panic attack. We tried pressing the call driver button but there was no answer. She wanted to pull the emergency cord, but passengers close by stopped her, reasoning that we would be going nowhere if she did.

But in the middle of all this chaos, the wonderful spirit of the British people shone through. One man standing close to me called out at one point “tickets please” – it would have taken a very brave and very thin ticket inspector to have boarded that train! Then my mobile rang. I’d already texted my partner that there was a problem on the trains and I would be late. He rang to gloat, especially when he heard the extent of the problem. He has a very loud voice and his laughter could be heard by everyone around me. The lady standing next to me tapped me on the shoulder. “Whoever that is, he isn’t your friend,” she announced. Everyone laughed.

The problems got worse as even when we did start moving it was only to stop again just before Stockport where all the platforms were already occupied by trains that could go no further and most were without drivers. Another 15 minute wait was ahead of us. But finally, we got onto the platform and mercifully more passengers got off than got on. Nevertheless it was three stops later before I managed to move into standing space in an air-conditioned carriage and yet another stop, probably another 30 minutes later before I managed to get a seat.

So, the nightmare train journey from hell. And just to cap off my day, as I rushed out of my home station hoping to catch the last bus back to my village I saw it pulling off the station forecourt. I did get home eventually that evening, very late, very tired and not wanting to see another train for a very long time.

Time waits for no man – except the teenager
Books, glorious books