Amanda Roberts launched her career as an author with the publication of her first novel, The Roots of the Tree, in 2014. It took several years to write, with many re-writes and revisions along the way. And she says this was certainly necessary. “I’ve always been a writer, but writing reports and features for the business-to-business sector, where the use of any adjectives or metaphors is frowned upon, is very different to becoming an author and writing creatively. My first draft was a bit like the Reduced Works of Shakespeare – Hamlet in two minutes!”

The Roots of the Tree is based on a true story – the emotional story of a woman (my mother) who, when in her early 60s made the devastating discovery that the man she had believed all her life to be her father actually wasn’t. The Roots of the Tree combines fact and fiction as my fictitious family delve into the past to unravel the truth, something that we didn’t do for various reasons.

This is a page-turner that will appeal to anyone interested in family history, ancestry and the way those skeletons in the family cupboard can have serious consequences for future generations.

Amanda Roberts is now working on

Amanda Roberts is now working on a series of children’s stories based on the myths and folklore of a tribe of people who live on the banks of the River Nile. These stories are co-written with a good friend who grew up as a member of one of the tribal clans. The aim is to publish them as a compendium of stories from this tribe with illustrations targeted at the 10-12 year old reader.

And, a second novel. This story focuses on the life and relationships of four women in a small English village. The first draft is now almost complete and I have started work on the initial edit.

To read a detailed interview with Amanda Roberts go to: https://toofulltowrite.com/2017/01/12/author-interview-amanda-roberts-the-roots-of-the-tree/ 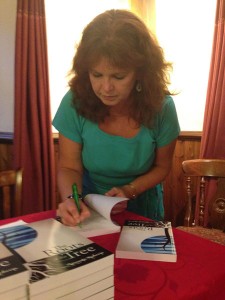